There’s an undeniable problem with implicit bias in the recruiting process in America today. It might be hard for you to admit, but there’s a good chance that bias exists in your company’s hiring process too. You might not even realize that your biases are influencing the way that you review job candidates. That’s why it’s so important to think about bias and have a conversation with your internal team on how to minimize the impact of implicit bias. 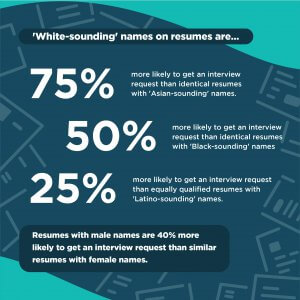 Similar to racial bias, gender bias can become an issue as soon as a hiring manager reads a candidate’s name. If the gender pay gap isn’t enough to prove that there’s a systemic issue in our country, then just take some time to review hiring data. Resumes with male names are 40% more likely to get an interview than similar resumes with female names.

In general, religious affiliation is easier to hide on a resume than gender and race. However, some recruiters may make assumptions on a candidate’s faith-based on their name alone. While religious bias can be an issue for worshipers of all religions, it especially affects Muslims. A 2018 report found that Muslim and Arab applicants were less likely to receive a callback than applicants of different religious backgrounds.

Many racial and ethnic biases in the hiring process are associated with an unfair assumption that people from a certain background may have inferior communication skills. To a lesser degree, victims of ageism experience a similar unfair stereotype. The most common employment bias associated with a person’s age is that older applicants are less skilled with computers and technology, so this is obviously a huge problem in the tech industry. In fact, 68% of baby boomers feel discouraged to even apply for tech jobs. The best way to remove age discrimination from your hiring process is to hide age indicators on resumes like an applicant’s photo, college graduation year, and work experience years.

The Halo Effect vs. The Horn Effect

The halo effect and the horn effect stem from the same issue – a tendency to overly focus on one detail of a candidate’s background. This could be a candidate’s college, hometown, work history, or personal background. The halo effect happens when a recruiter focuses heavily on one positive aspect of a candidate, while the horn effect occurs when a recruiter heavily focuses on a negative trait. Either way, these biases cloud recruiters’ judgment and influence hiring decisions.

How to Remove Bias from Your Hiring Process

You might think that your hiring process is free of bias, but chances are that’s not the case. Even the idea of “trusting your gut” when recruiting inherently leads to biased and baseless hiring decisions, as it tells recruiters to listen to their implicit biases as opposed to actual candidate quality. Here are a few steps you can take to proactively minimize the impact of implicit bias. 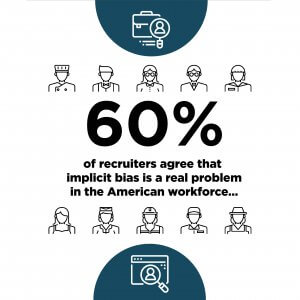 Think About Where You’re Posting Jobs

If you only post jobs on one job board then you’re effectively narrowing down your candidate pool to only that group of people. Instead, post your jobs to as many online job boards as you can and also consider posting jobs in the newspaper as well.

Ask yourself, are you hiring for talent or are your hiring someone you think would be a “good fit”. How a candidate fits into your corporate culture is something that you can consider further down the line in your review process, but it should not be a factor in your initial evaluation. The first step in your applicant review process should be completely objective.

Candidate evaluation can only be objective if you remove all indicators of race, gender, age, religion, and personal background. It can be tough to avoid this kind of information because much of this can be inferred through a candidate’s resume. That’s why you should switch to a blind resume review process to avoid common resume traps like name and college graduation year. A person’s name can give you clues on their race and gender, while a person’s graduation year hints at their age. 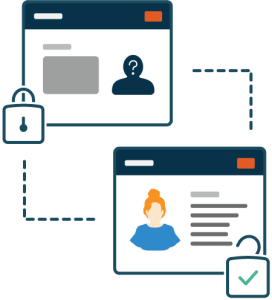 Indicators of Personal Details on a Resume to Avoid

The best way to make your initial candidate review process objective is to evaluate candidates on talent alone. That’s why we developed a way to review your applicants based on their cognitive aptitude, the #1 predictor of job success. With JobFlare Connect you’ll be able to see the cognitive ability scores of job seekers and invite tops scorers to apply for your jobs. You won’t see anything except their aptitude scores and initials until after they apply, so there’s no way to know someone’s race, gender, or age. 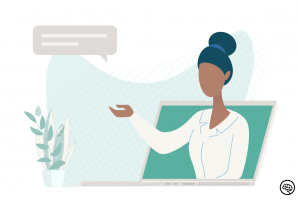 Keep Biases Out of Your Interviews

It’s extremely difficult to completely remove bias from the interview process. Hiring managers are human beings with unique values and opinions that can subconsciously influence their decisions. Because of this, there are still steps that should be taken to level the playing field and give all candidates an equal interview experience. The best way to do this is to standardize interview questions for each position that you’re filling. Maybe this sounds obvious, but there are countless cases of hiring managers asking older candidates more questions about their proficiency with technology or asking candidates from other countries more questions about their communication skills. This should always be avoided. Candidates have an equal chance to shine when they’re all asked the same questions.

Actively Monitor the Diversity of Your Staff

Your efforts to minimize bias and improve diversity should go beyond recruiting. Take a close look at the makeup of your current staff to gain insights into your current hiring patterns. If you find that your team is not very diverse take steps to ensure that applicants from all backgrounds are getting a fair opportunity. You can start by training your performance evaluators to minimize bias in their decision making and deploying software tools to debias your evaluation process.

How to Keep Your Team Connected & Productive While WFH