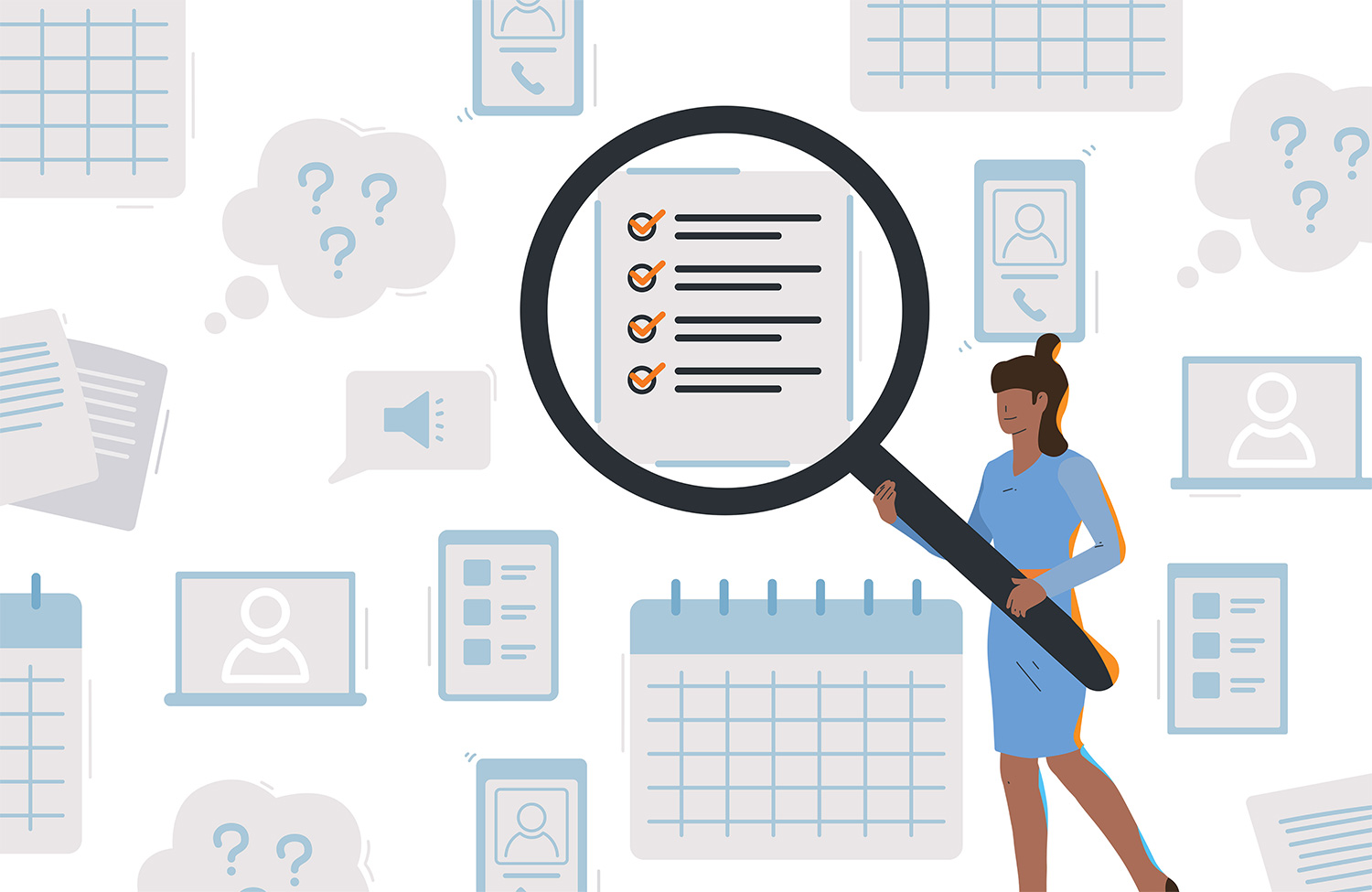 It's standard for pre-employment aptitude assessments to test your pattern recognition, spatial awareness, and focus. Though these may seem unrelated to the job at first, these question types are designed to illuminate your attention to detail, ability to focus, and critical thinking - valuable skills that help you succeed in any job.

Let’s take a look some real sample CCAT questions, and see which JobFlare games can help you prepare for them.

Time to put your eagle eyes to the test. Attention to detail is listed on basically every job description ever. And for good reason! Paying attention and identifying flaws – even small ones – can mean the difference between success and disaster. Remember the NASA engineers who crashed a $125 million satellite into Mars because they forgot to convert units from Imperial to Metric? NASA definitely does.

Which is why pre-employment tests like the CCAT measure it. Being detail-oriented is important whether you’re an entry level sales associate or a literal rocket scientist.

Let’s look at an example question. 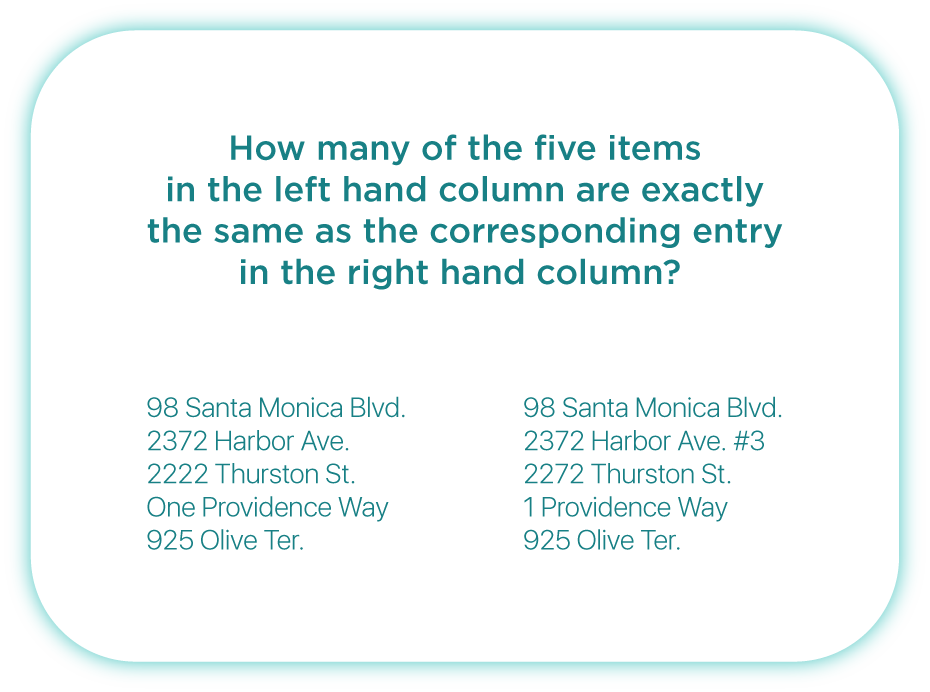 The correct answer is 2.

So there are only 2 identical items between the two lists.

Robot inspector is the perfect training tool to help you learn how to quickly identify whether two things are identical or not.

You’ll get lots of practice recognizing tiny changes between two robots. Robot Inspector is the perfect way to practice these recognition skills and help prime your brain to identify similarities and differences in a flash. 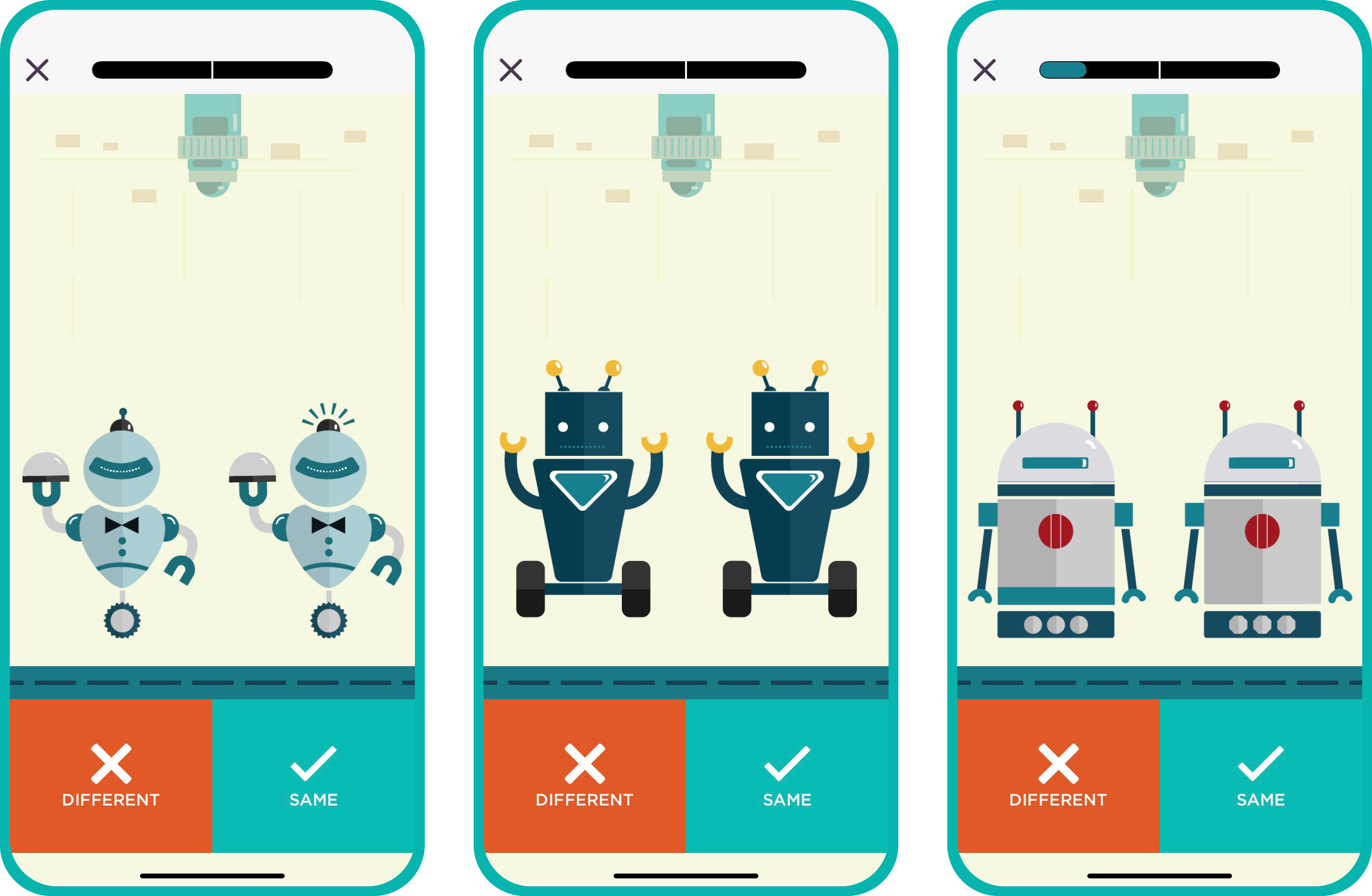 Aptitude tests like the CCAT will often have pattern recognition questions, where you need to identify the next item in a sequence, or determine which item in a group doesn’t belong. Questions like this require strong focus and the ability to recognize similarities and differences between objects quickly.

Let’s take a look a real sample CCAT pattern recognition question, and see which JobFlare games can help you prepare for them. 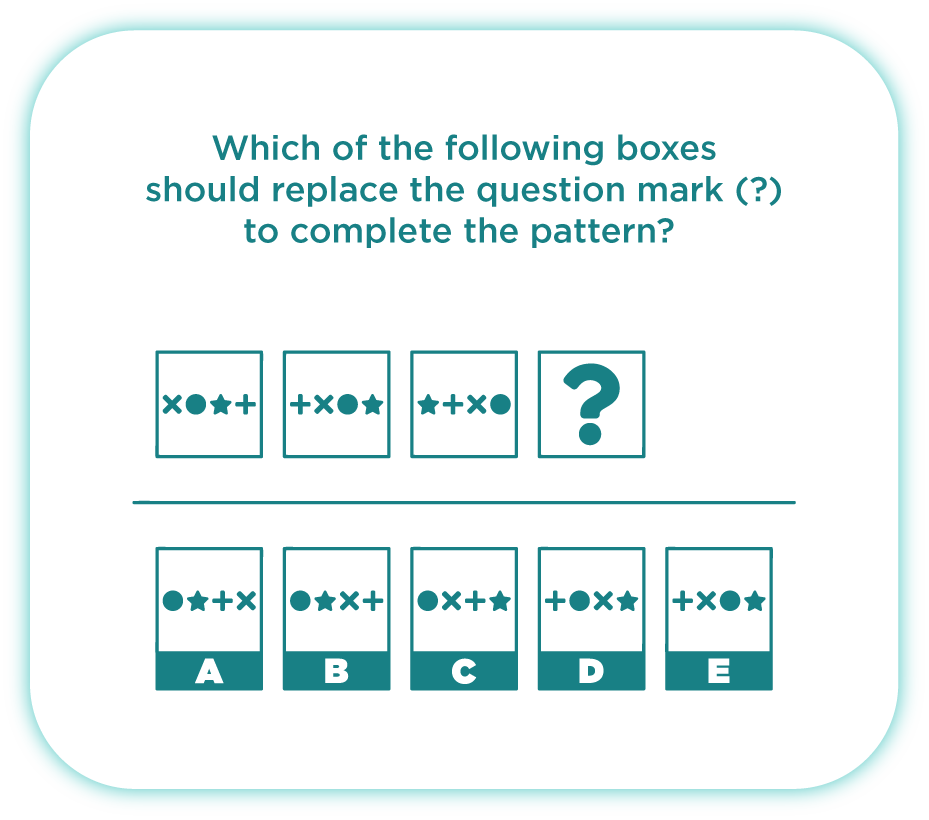 The correct answer is A.

The first step to answering any question like this is to try and identify the pattern. What is changing from one box to another? Does anything appear to be the repeating?

Because Box 3 has a Circle in the final position, you know (based on the pattern) that the Circle needs to be in the first position. This eliminates options D & E. We also know that the Circle is always preceded by the Star, which knocks out option C. We’re now left with only two options – but in the established pattern, Star is always followed by Plus.
A is the only one that fits the pattern presented in the first three boxes.

Robot Inspector can also help you prepare for pattern recognition questions. Identifying patterns requires strong attention to detail and focus – both of which can be honed with repeat play of this spot the difference game. 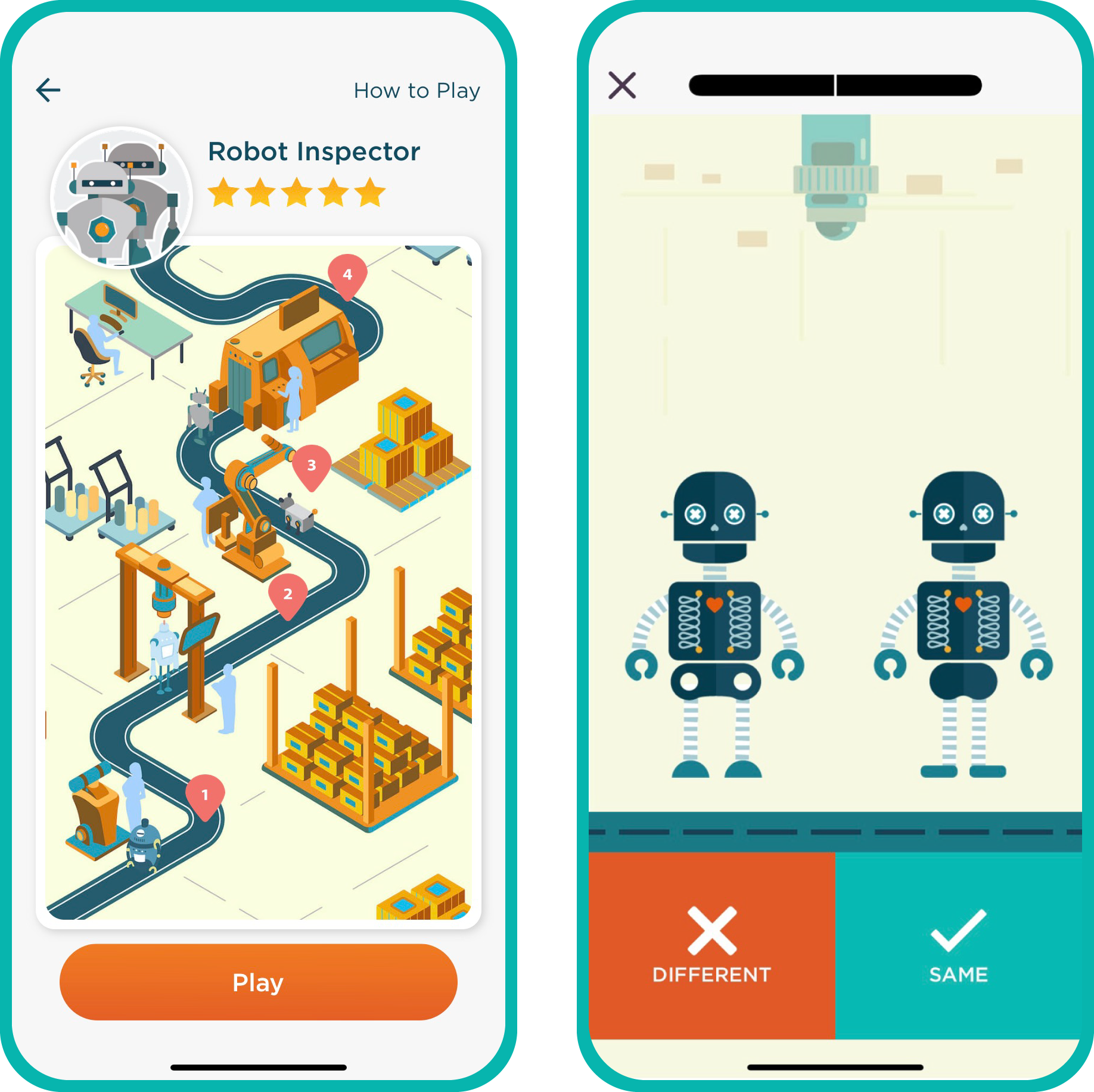 One of these things is not like the others, one of these things does not belong! Some questions will task you to determine which item in a list doesn’t fit in with the rest. Problems like these are made to measure your information processing and your critical thinking skills.

These questions are outlier identification problems – there’s a lot of information to take in and evaluate in a short amount of time, but you can boost these skills by getting some practice in.

Put your brain to the test with this next example: 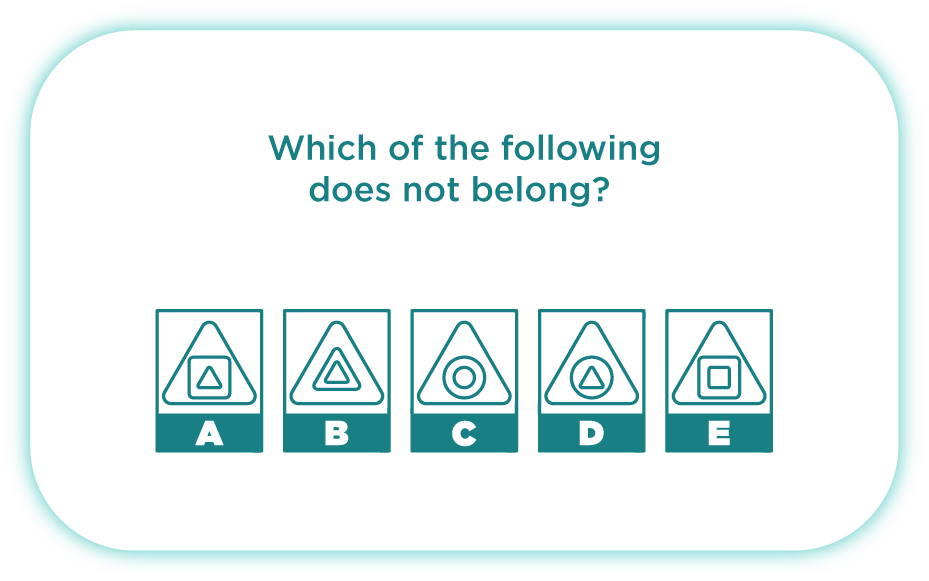 The correct answer is B.

This is a classic outlier identification problem. To solve it, study all 5 options and determine what they have in common.

In this case, each choice has three shapes. What are those shapes? Each one contains a three individual shapes and at least two different types of shape. Except Choice B, where all 3 shapes are triangles.

Since this is the only one that features a single shape, it’s the one that doesn’t belong.

Fast Friends is a great way to practice for outlier identification problems. While the focus of the game is memory, you need to recognize the people and then determine if you did or didn’t meet them at the party.

This game will hone your focus and will help you figure out what – or in this case, who – doesn’t belong because they weren’t in the original group. 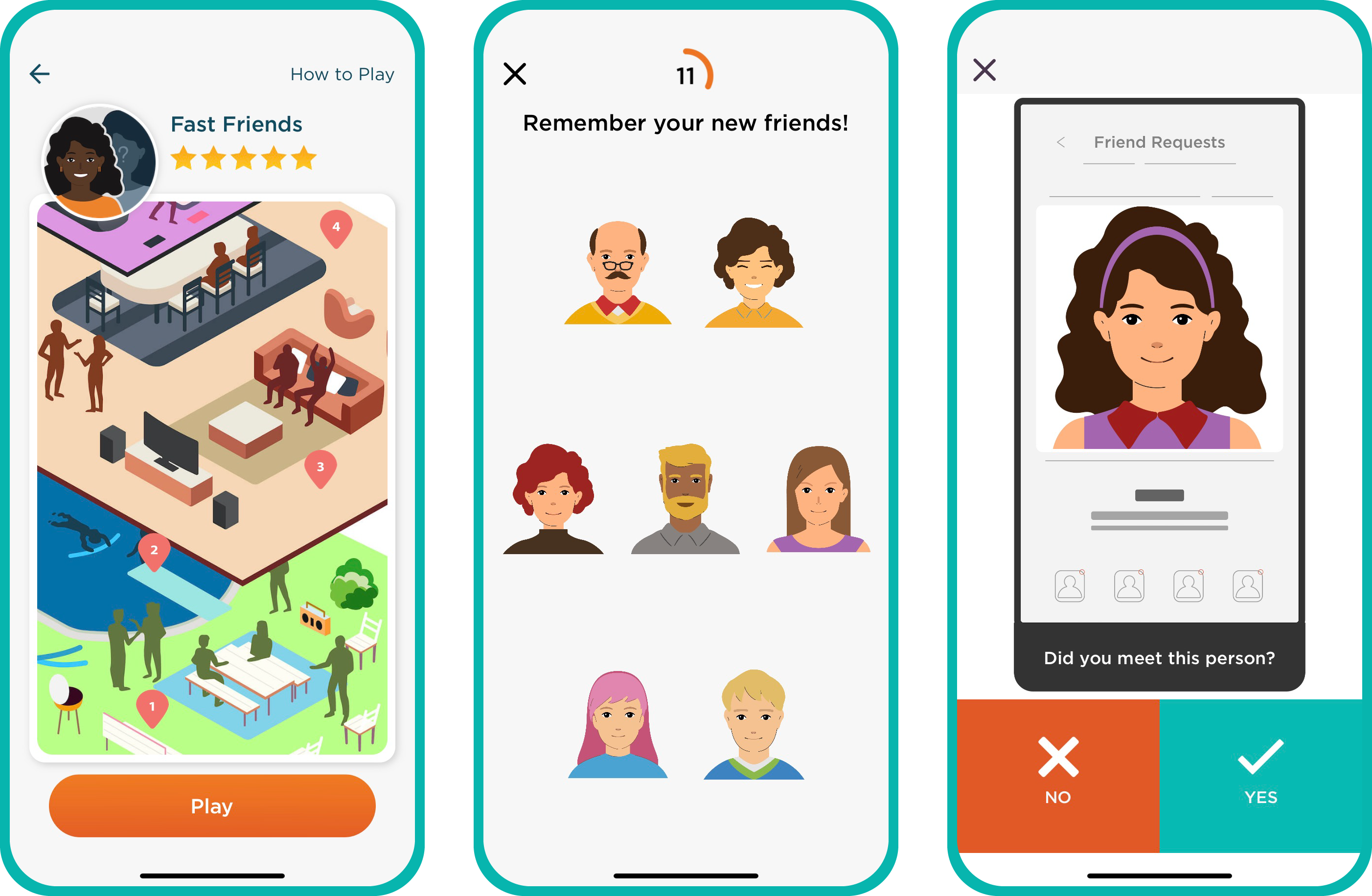 Getting ready for an aptitude test?